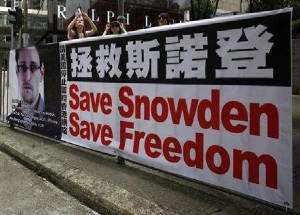 By Jim Fetzer and PressTV

The most obvious responses to Edward Snowden’s revelations that the NSA has been conducting massive and all-pervasive surveillance of the American people–and, indeed, of targeted populations abroad–have come from those, such as Sens. Diane Feinstein (D-CA), John McCain (R-AZ) and Lindsay Graham (R-SC), who maintain that he is placing the national security of the United States at risk.
There is no evidence that that is the case, where the very idea that the world’s greatest spying agency would attempt to have him prosecuted for espionage is at least faintly absurd.
Other less-familiar sources have taken the opposite tact by asserting that, since everything he has revealed was “already known”, his integrity and sincerity are in doubt, where he may actually be some kind of dupe or double-agent.  The Anti-New York Times, for example, contends that he cannot have abandoned his $200,000 a year salary, his girl friend and his life to tell the world such familiar information, which makes his actions highly suspicious from the opposite side of the spectrum.
That strikes me as very odd, since no one I know has ever taken for granted that the NSA had such an all-encompassing surveillance program in place, especially one that vacuums up our phone calls, our emails, our financial transactions and, no doubt, our medical records as well.  A more intriguing proposal has come from Jon Rappoport, “Ed Snowden, NSA, and fairy tales a child could see through”, who considers the situation to be completely preposterous:

Let’s see. NSA is the most awesome spying agency ever devised in this world. If you cross the street in Podunk, Anywhere, USA, to buy an ice cream soda, on a Tuesday afternoon in July, they know.
They know if you sit at the counter and drink that soda or take it and move to the only table in the store. They know if you lick the foam from the top of the glass with your tongue or pick the foam with your straw and then lick it.
They know if you keep the receipt for the soda or leave it on the counter.
They know whether you’re wearing shoes or sneakers. They know the brand of your underwear. They know your shaving cream, and precisely which container it came out of.
But this agency, with all its vast power and its dollars…
Can’t track one of its own, a man who came to work every day, a man who made up a story about needing treatment in Hong Kong for epilepsy and then skipped the country.
Just can’t find him.

Rappoport believes that these revelations come from the CIA, which is engaged in a “turf war” with the NSA, resenting that the NSA has been granted funding at the expense of the CIA, for which it is now engaged in retaliation by embarrassing it.

YouTube – Veterans Today –
None of those who question Snowden’s actions, however, are responding to the implicit distinction that his revelations have accented between “national security”, on the one hand, and “the national security state”, on the other.  The targets the NSA has been focusing upon–such as veterans, Constitutionalists, Ron Paul supporters, NRA members and 9/11 Truthers–do not pose any threat to the national security of the United States.  What they pose is a threat to the imposition of a fascist military/police state of the kind the world has seen with The Fourth Reich and the former Soviet Union, where the NSA and DHS are two sides of the same fascistic coin.  The situation appears to be dire, as I have sought to explain here.  We must take appropriate measures–which including arming ourselves for the conflict to come–by confronting the grim reality that his revelations have exposed. His true motivation was displayed when he said he was doing this because “I am an American”!